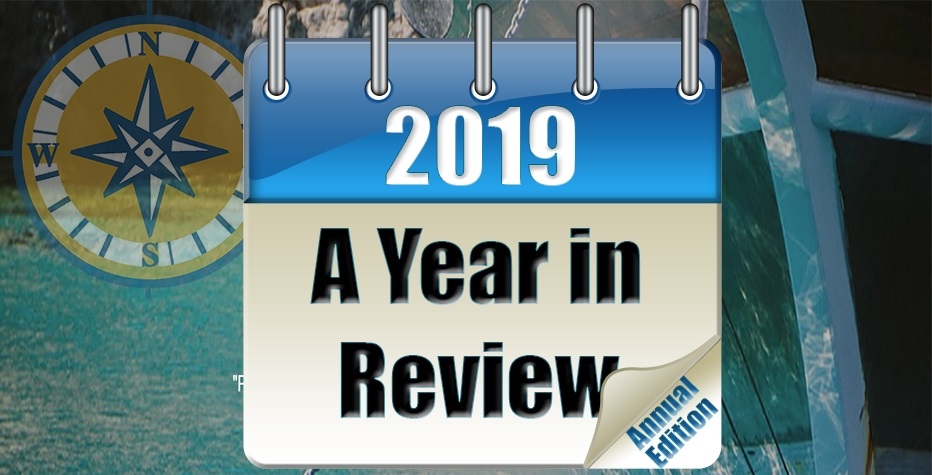 The year began with the government stymied by a shutdown, and ended with articles of impeachment levied against the president. In between, both domestic and global economies showed signs of slowing, all while the trade war between the United States and China loomed throughout the year. Nevertheless, investors remained relatively bullish toward stocks, pushing several major indexes to record highs.

While domestic economic growth may have slowed in 2019 compared to 2018, it showed resilience and stamina. The third-quarter gross domestic product expanded at an annualized rate of 2.1% — moderately down from 2018's 3.0% rate, yet still strong enough to outpace global economic growth by a considerable margin. Consumer spending — which accounts for about two-thirds of the U.S. economy — surged, buoyed by a strong labor market, near-record unemployment, solid wage growth, and a burgeoning stock market. All told, the domestic economic expansion continued into its 11th straight year, the longest run in U.S. history.

Last year saw trade disputes between the United States and several of its trade partners reach an accord, but the trade war with China roared. The world's two largest economies engaged in a tit-for-tat skirmish, with each country volleying tariffs on their respective imports at the expense of the exporting nation. Coincidentally, a limited deal was announced just before the holiday shopping season, with the U.S. agreeing to forgo new tariffs and China assenting to allow more U.S. agricultural imports. Further negotiations are presumed, but the relationship between the economic giants remains tenuous at best.

Not only did the ongoing trade war affect global economies, but it also impacted domestic business investment, industrial production, and exports. Part of the justification cited by the Federal Reserve for lowering interest rates three times last year was weakness in business fixed investment and exports. As of November, new orders for durable goods were down 1.3% from the same period in 2018, and business (nonresidential) investment fell 2.3% in the third quarter.

The new year begins with a strong stock market and solid economic growth. The Secure Act, passed in late December, should change the retirement planning (and saving) landscape to some extent. However, the Treasury budget deficit for fiscal 2019 (October 2018-September 2019) exceeded $98 billion — 26% higher than the 2018 fiscal-year deficit. The trade war with China may cool with more mutual concessions, or accelerate, which would continue to dampen global economic growth. The new year will begin with the impeachment process and end with November's presidential election. What happens in between is anyone's guess. Will unemployment and inflation remain low? Will stocks continue to experience growth? Will oil and gas prices moderate or surge? Will the domestic economy continue to accelerate, or suffer a setback? Can the world economy recover, or will it continue to stagnate? If nothing else, 2020 looks to be an interesting year.

Chart reflects price changes, not total return. Because it does not include dividends or splits, it should not be used to benchmark performance of specific investments.

Eye on the Year Ahead

Economic growth slowed in 2019, but not enough to prompt investors to avoid stocks. Fears of a global economic slowdown continuing into 2020 may affect the U.S. economy as well. The housing market hasn't picked up the pace and is generally lagging behind other economic mainstreams. Ongoing global trade negotiations between the United States and China should bode well for the U.S. and global economies. Ultimately, our economy, equity markets, and standing in the world depends on the outcome of the impeachment proceedings and November's presidential election.

Data sources: Economic: Based on data from U.S. Bureau of Labor Statistics (unemployment, inflation); U.S. Department of Commerce (GDP, corporate profits, retail sales, housing); S&P/Case-Shiller 20-City Composite Index (home prices); Institute for Supply Management (manufacturing/services). Performance: Based on data reported in WSJ Market Data Center (indexes); U.S. Treasury (Treasury yields); U.S. Energy Information Administration/Bloomberg.com Market Data (oil spot price, WTI Cushing, OK); www.goldprice.org (spot gold/silver); Oanda/FX Street (currency exchange rates). News items are based on reports from multiple commonly available international news sources (i.e. wire services) and are independently verified when necessary with secondary sources such as government agencies, corporate press releases, or trade organizations. All information is based on sources deemed reliable, but no warranty or guarantee is made as to its accuracy or completeness. Neither the information nor any opinion expressed herein constitutes a solicitation for the purchase or sale of any securities, and should not be relied on as financial advice. Past performance is no guarantee of future results. All investing involves risk, including the potential loss of principal, and there can be no guarantee that any investing strategy will be successful.

**PLEASE NOTE: The information above being provided is strictly as a courtesy. When you link to any of the sites provided here, you are leaving this site. We make no representation as to the completeness or accuracy of information provided at these web sites. Nor is the company liable for any direct or indirect technical or system issues or any consequences arising out of your access to or your use of third-party technologies, web sites, information and programs made available through this web site. When you access one of these web sites, you are leaving our web site and assume total responsibility and risk for your use of the web sites you are linking to.  Registered Representative offering securities through First Allied Securities, Inc. A Registered Broker/Dealer (Member FINRA/SIPC).  Advisory services offered through Guidant Planning, Inc. and First Allied Advisory Services, Inc. Both Registered Investment Advisers.  Guidant Planning, Inc. is not affiliated with First Allied Securities, Inc. and/or First Allied Advisory Services, Inc.  Allen G. Yee CFP®, RFC, CWS®, CA Insurance License #0747874